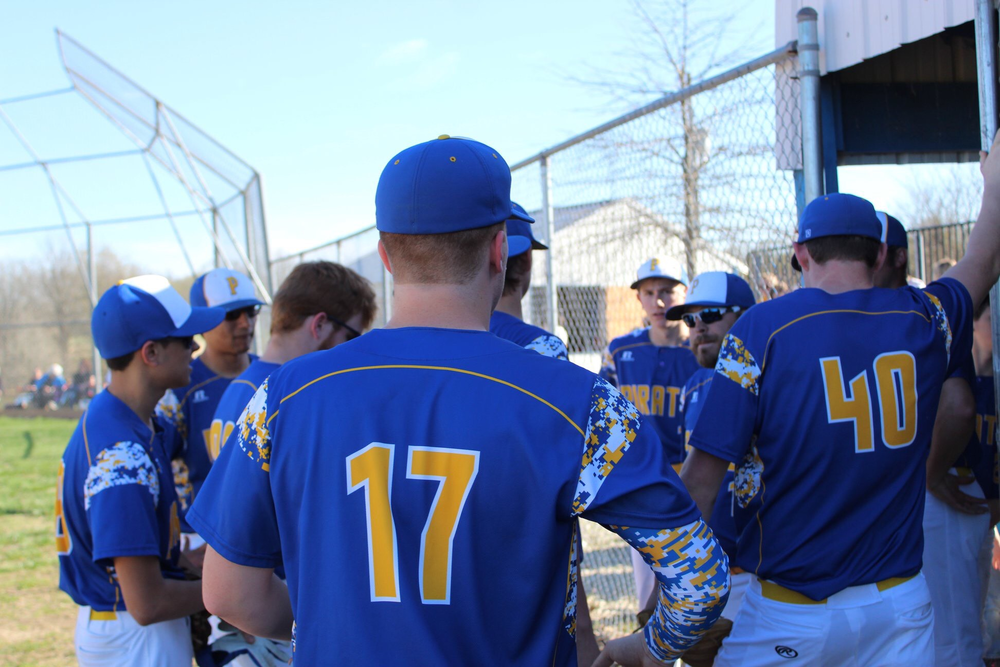 MACKS CREEK - Macks began a very busy week of baseball by playing host to a pair of Polk County League Conference opponents, the Weaubleau Tigers and Humansville Tigers in Varsity baseball action.  They split the twin-bill, losing to Weaubleau 11-1 and defeating Humansville 9-5.

Game one featured a match-up between Macks Creek and Weaubleau.  The game was a pitcher's duel between Weaubleau's Freddie Wieder and Macks Creek's Hunter Lane.  Both pitchers kept the opposition off the scoreboard until the fifth.  Wieder doubled, stole third, and then scored to put the Tigers up 1-0.  Macks Creek was unable to answer in their half of the frame.

In the top of the fifth the floodgates opened and the Tigers plated seven runs.  Following two quick outs, Sam Rutherford was hit by a pitch, stole second, moved to third on a passed ball, and scored on an error.  Ethan Foster reached on a strike out-passed ball and had moved to second on the error.  A triple off the bat or Briar Tucker scored Foster and then a single from Tucker Hilliard pushed in Briar and the advantage moved to 4-0.  Wieder following with a single to center that was misplayed by the center fielder, allowing him to reach second and Hilliard to score.  A double off the bat of Cadan Kauffman scored Wieder before he came around to score on Cameron Ott's ground to short that was mishandled.  Ott would reach second on the play, steal third, and then come in to score on a wild pitch to push the lead to 8-0. 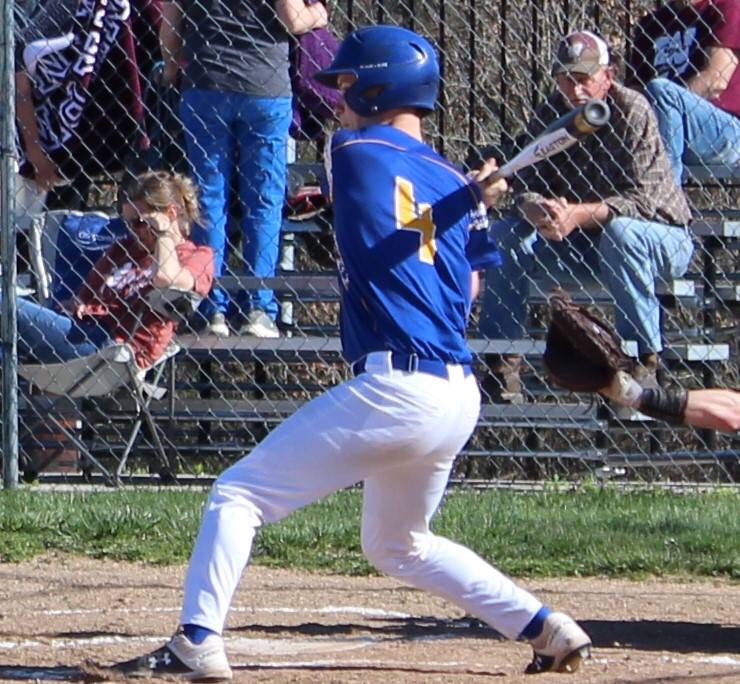 Macks Creek countered with their only run of the game in the bottom of the sixth.  Carsen Strutz's fly ball to right was dropped, allowing him to reach second.  An error by the center fielder allowed him to move to third before Zane Whitworth's ground out to first scored him, cutting the lead to 8-1.

Weaubleau put up three more runs in the top of the seventh to round out the scoring.  Macks Creek went 1-2-3 in their half of the frame.

"Offensively we put it in play but we struggled to adjust to pitches again and we struggled defensively," commented Coach Jason Trusty of Macks Creek, "never a good combination when playing against good baseball teams."

Hunter Lane (1-2) took the loss.  He started and worked the first five-and-two-thirds innings, allowing eight runs, one earned, on seven hits while striking out seven and hitting two batters.  Tanner Smith worked an inning and was touched for three unearned runs on two hits to go along with two strike outs and a walk.  Oscar Cortez retired the only batter he faced in the seventh inning.

Freddie Wieder picked up the win the the Tigers.  He worked the complete game, allowing one unearned run while holding the Pirates hitless.  He struck out eight and walked one.

Weaubleau's offense was paced by Wieder's three-for-five night.  Wieder doubled, singled twice, had an RBI, and scored three runs.  Cadan Kauffman and Tucker Hilliard each went two-for-four .  Kauffman doubled twice, scored a run, had two RBI's and was hit-by-a-pitch.  Hilliard singed twice, had an RBI, and scored a run.  Sam Rutherford singled, was hit-by-a-pitch, and scored while Briar Tucker tripled in a run, reached on an error, and scored two runs.  Cameron Ott reached three times on errors and scored once and Ethan Foster reached on a strike out-passed ball, walked, and scored two runs.  Tate Burkhart also walked in the contest.

In game two Macks Creek rebounded with a win over the Humansville Tigers, 9-5.  The game had originally been started on March 28, but the weather decided to enter in the fray and the game was suspended.  The game was in the bottom of the third inning with the Pirates at bat and the score tied 1-1.  That is where play resumed.

Humansville had struck first in the first inning originally when Dodge Hogan walked, stole second, moved to third on an error, and then scored on a double off the bat of Jacob Vest.  Macks Creek had responded with a run in the second inning when Colten Walter reached on an error, stole second, moved to third on an overthrow, and the crossed the plate on Oscar Cortez's sacrifice fly to left.

Macks Creek's Cole Register entered the resumed game with a 1-2 count and managed to work a walk out of the pitcher.  He would steal second and move to third on a wild pitch.  Grant English drew a walk and moved to second on a steal.  Register would be caught stealing on a suicide squeeze that did not occur, and English would steal third.  Back-to-back strike outs ended the threat.

Humansville took a 2-1 lead in the top of the fourth.  Following a strike out Joan Masferrer stole second, moved to third on a passed ball, and eventually was able to cross the plate on a passed ball.

The Pirates responded with three in their half of the inning.  Colten Walter reached first when his ball was misplayed by the first baseman.  He moved to second on an errant pick-off throw from the pitcher, to third on a wild pitch, and then scored on a passed ball to tie the game two.  Oscar Cortez walked and moved to second on a balk.  Tanner Smith then hit a pop up to second that was dropped, putting runners at first and second.  Carsen Strutz followed with a ground ball to short that was misplayed and Cortez scored.  Tanner and Strutz would execute a double steal before Smith would score on Cole Register's RBI-ground out to first.  Macks Creek now held a 4-2 lead.

The sixth saw Humansville get back to within one.  Scottie Key walked, moved to second on Clarence Foley's sacrifice bunt, to third on a wild pitch, and then he would steal home.  Back-to-back strike outs ended the inning.

The Pirates plated five more runs in their half of the sixth.  Oscar Cortez was hit-by-a-pitch to lead off the inning and moved to second on a wild pitch.  A walk to Tanner Smith and a passed ball saw Macks Creek with runners at second and third with nobody out.  Carsen Strutz would walk to load the bases.  Oscar would come in on a wild pitch to push the lead to 5-3 and Tanner would score on Grant English's fielder's choice to first, where the throw came home, and move the Pirates ahead, 6-2.  After a pop up on the infield was called for out number two, Trever Smith belted a bases-clearing double to left field to push the lead to 9-3.

The Tigers promptly came out and drew two walks to put runners at first and second with no outs, with Samuel Boian and Tarquin Smith each drawing walks.  A ground ball to short off the bat of Dodge Hogan saw Boian tagged out and Smith erased at second for an unconventional double play.  Michael Youngblood was hit-by-a-pitch and Garrett Hoelscher walked to load the bases.  Scottie Key smacked a single through the left side to plate both Hogan and Youngblood, but Hoelscher was throw out trying to reach third for the final out of the game.

"We did a nice job of coming out and ending the night on a good note," said Coach Trusty, "it took us a while to get things going but we were able to rebounding in game two."

Colten Walter (3-0) picked up the win in relief.  He worked the final four frames and was touched for four runs on one hit while striking out five, walking five, and hitting one batter.  Oscar Cortez had started the game originally and had worked the first three innings, allowing one unearned run on two hits while striking out six and walking four. 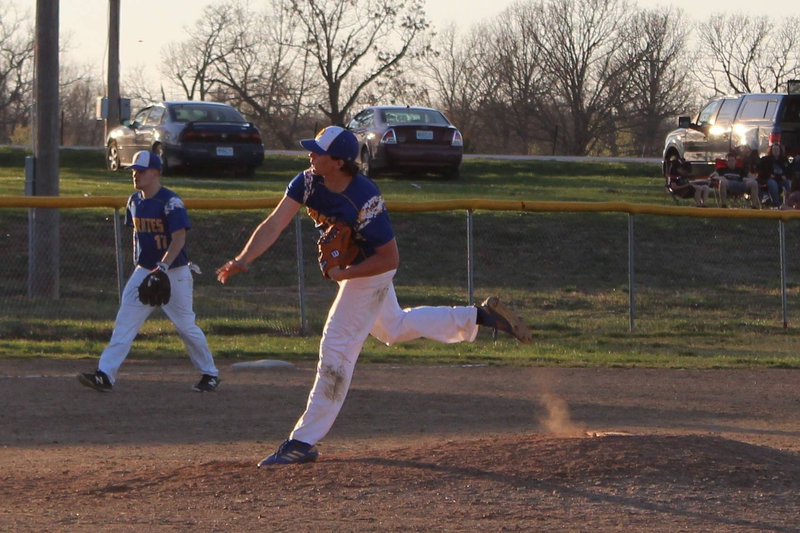 Scottie Keys had been the starter when the game had begun a week-and-a-half ago and was able to throw again in the resumed game.  He worked the first five-plus innings, allowing seven runs, four earned, on two hits while striking out eight, walking six, and hitting one batter.  Kooper Bays worked an inning and gave up two runs on one hit while striking out one and walking one.

Macks Creek is back in action again on Tuesday (today) when they travel to Hermitage for a 5:00 tilt with the Hornets.  On Thursday they travel to Climax Springs (5:00) before another road game facing PCL foe Walnut Grove (5:00) on Friday.