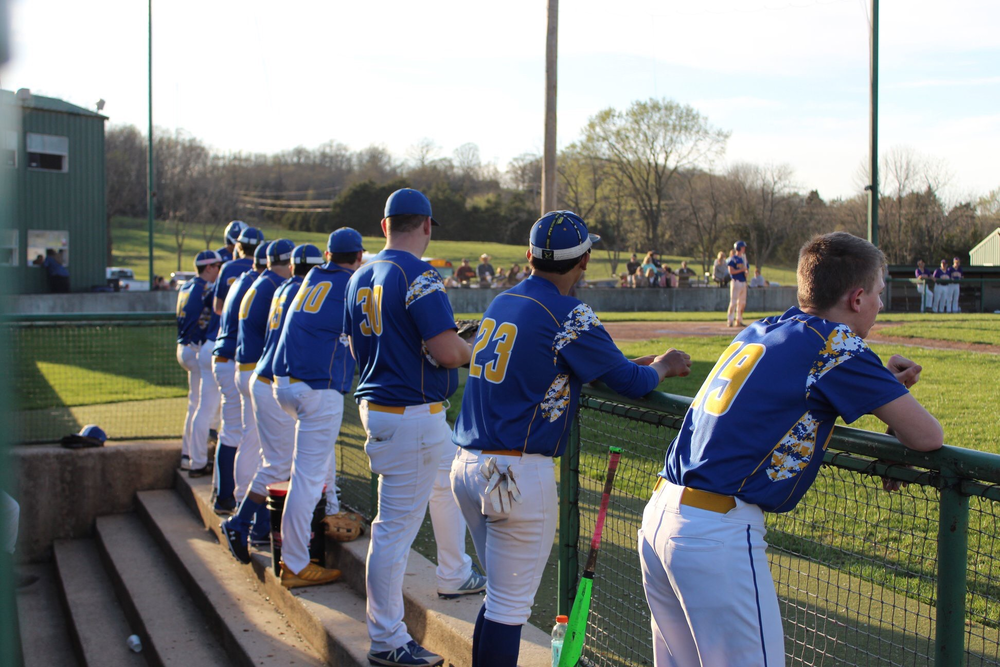 STOUTLAND - Macks Creek battled back from an eight run deficit after two innings on Monday night but still came up just short as they dropped an 11-10 decision to the Stoutland Tigers.

Cole Register reached on an error to lead off the game and stole second.  A one-out single off the bat of Hunter Lane brought him in and pushed Macks Creek to 1-0.  Back-to-back strikeouts ended the frame with Lane stranded at second.

In the bottom of the inning the Tigers plated five runs.  Jonathan Huff walked before Grant Zeigenbein drove him in with a double to the corner in left.  Oliver Eilenstine hit a ball back to the pitcher, who threw to third but the runner had not advanced.  A double-steal by Zeigenbein and Eilenstine put runners at second and third before a wild pitch scored Grant.  Eilenstine would later score on a passed ball for a 3-1 lead.  Trevor Hubbs was hit-by-a-pitch, moved to second on a passed ball, to third on a wild pitch.  Meanwhile, Wyatt Lauder walked and stole second.  Both runners would score on Tanner Holden's single to right, with Lauder scoring when the ball was misplayed by the fielder.  Holden would move to second on the error and to third on a wild pitch.  Tristan Robertson was then hit-by-a-pitch which prompted a pitching change by the Pirates.  Tristan would get picked off third by the catcher and back-to-back strikeouts ended the threat with the Tigers ahead 5-1. Macks Creek loaded the bases in the top of the third but were unable to push any more runs across.  Zeigenbein reached on an error in the bottom of the inning with one out, Eilenstine walked, and Hubbs was hit-by-a-pitch to load the bases, bringing Wyatt Lauder to the plate.  He launched a 1-1 offering over the wall in left for a 9-1 Stoutland lead.  The game looked to be a route.  Another pitching change for the Pirates and back-to-back strikeouts ended the inning.  Each team would put runners on in the third but no runs would score.

In the top of the fourth the Pirates started their rally.  Zane Whitworth singled to deep second base and stole second.  He would move to third on a wild pitch ahead of a Grant English walk.  Whitworth then scored on a wild pitch while Grant moved to second.  A walk to Cole Register put runners at first and second before Colton Walter laced a double to left.  English would score on the play to make it a 9-3 game.  With runners at second and third Hunter Lane put a ground ball past third and into the left field corner to push in Register and Walter to cut the deficit to four at 9-5.  He would come in to score when Trever Smith's ball to short was off the fielder and into center, closing the gap to 9-6 now.  Stoutland was unable to put two runners on in the bottom of the inning but were unable to score.

The fifth inning saw Macks Creek tie the game.  Carsen Strutz singled to lead off the inning and moved to second when Zane Whitworth's ground ball to short was mishandled.  Each runner moved up a base on Grant English's ground out to first before Carsen scored on a Cole Register's ground out to short.  Colton Walter then stepped to the plate and smacked his first career Varsity home run, a two-run shot to tie the game at nine.  Hunter Lane reached on a walk after that and Trever Smith walked, but Lane was erased trying to steal third. 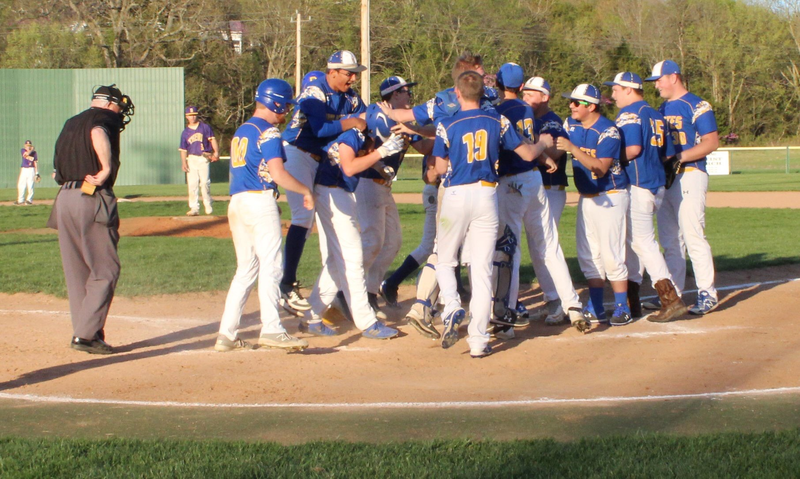 Stoutland regained the lead in the bottom of the inning.  Jonathan Huff and Grant Zeigenbein both walked before a single off the bat of Trevor Hubbs scored Huff and moved to Zeigenbein to third.  He would later score on a wild pitch to create an 11-9 lead for the Tigers.

Macks Creek plated their final tally in the sixth.  Oscar Cortez reached on a walk, moved to second when Carsen Strutz's soft fly was caught at short and the throw went high, and then scored when Zane Whitworth's ground ball to short went off the glove of the fielder.  The Pirates had a chance in their half of the seventh to tie the game, but a double play ended the threat.

"We are still inconsistent with how we approach each night," said Coach Jason Trusty, "if we play the first two innings of the game like we did the middle four then this is a different game altogether."

"We also had some base running blunders tonight, and they eventually caught up with us in the end."

Hunter Lane (1-3) suffered the loss.  He entered in the second and kept Stoutland scoreless until the fifth.  He was allowed those two runs on three hits while striking out 12, walking four, and hitting two batters.  Colton Walter started and last seven batters.  He allowed five runs, four earned, on two hits while walking two and hitting two.  Oscar Cortez relieved and worked an inning-and-a-third, allowing four runs, three earned, on one hit while striking out two, walking one, and hitting one batter. 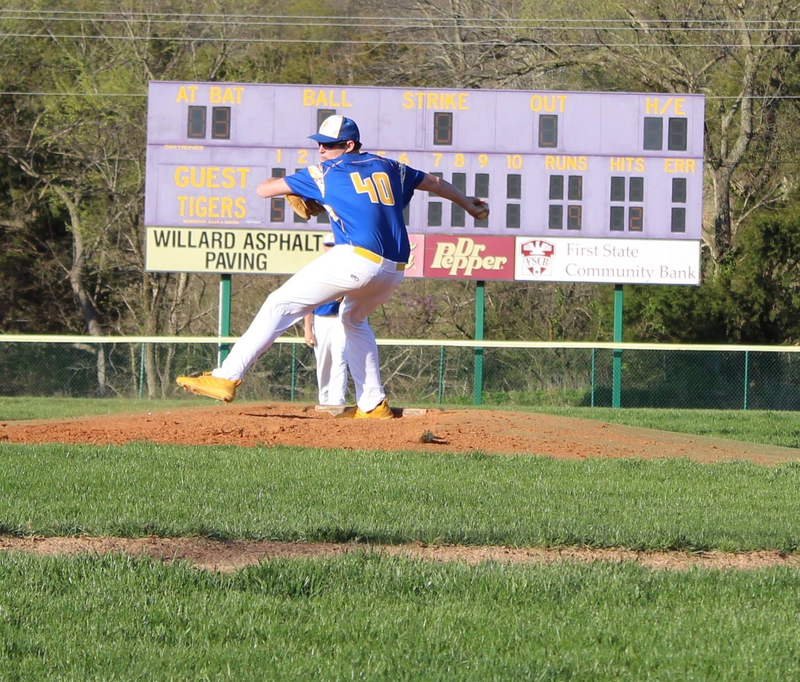 Grant Zeigenbein went five innings in collecting the win.  He was touched for nine runs, five earned, on nine hits while striking out six and walking five.  Tanner Holden worked the final two frames and allowed an unearned run on no hits to go along with one strike out.

Grant Zeigenbein helped his cause at the plate for the Tigers with a two-for-three night, which included an RBI-double and a single.  He also reached on an error and walked to go along with three runs scored.  Trevor Hubbs singled in a run, scored twice, and was beaned twice, Wyatt Lauder had a grand slam, four RBI's, a walk, and two runs scored, and Tanner Holden collected an RBI-single to go with a hit-by-pitch.  Jonathan Huff walked twice and scored twice, Oliver Eilenstine reached on a fielder's choice, walked twice, and scored twice, Tristan Robinson was hit-by-a-pitch, Tyson Branch singled and was hit-by-a-pitch, and Abe Stamper walked.

Macks Creek drops to 7-5 while Stoutland moves to 3-9.  Macks Creek is back in action at home on Tuesday against Class 2 State-Ranked Skyline before welcoming the School of the Osage to town on Thursday.  Game times are set for 5:00.

The Macks Creek JV dropped an 8-2 decision in the nightcap.

Zack Wallace made his first start of the Spring and took the loss.  He worked all three innings, allowing eight runs, five earned, on no hits while striking out three and walking 11. 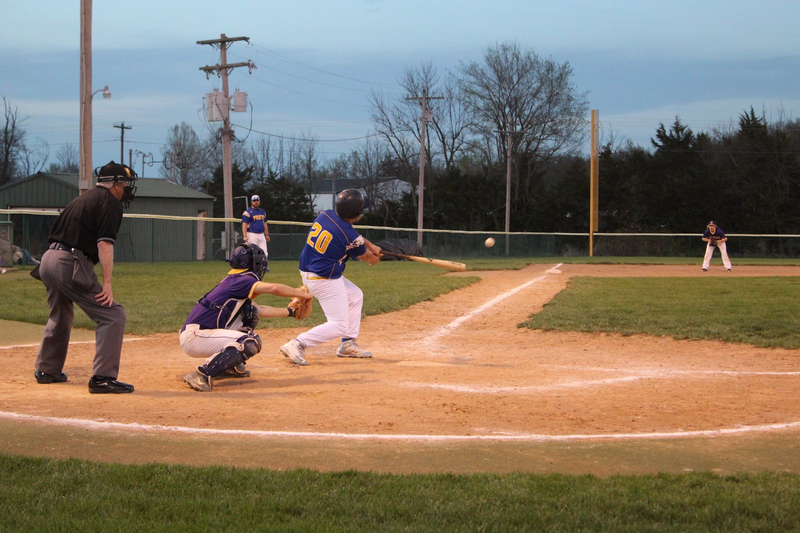 The JV Pirates fall to 0-5 with the loss.