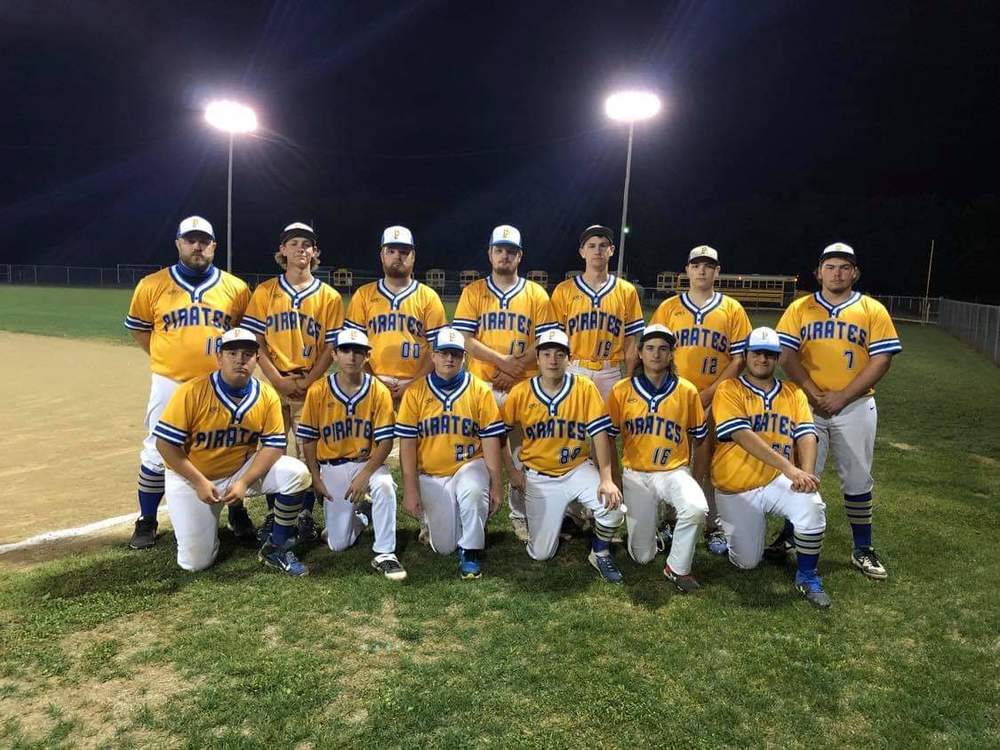 CROCKER - Macks Creek and Crocker both finalized their Fall seasons on Friday night with a tilt in Crocker. At the end of the night Macks Creek came away with their first win, an 11-9 victory.

The Pirates plated their first run in the top of the first. Grant English singled and stole second. He came around to score on Trever Smith's single to left. Smith advanced to second on the throw home. Courtesy runner Olivier Sanchez reached third on a wild pitch before a fly out and ground ended the inning.

Crocker responded in the bottom of the inning. Nathan Routh singled to center with one out, stole second, and then came around to score when Balin Huey singled to left. A strikeout ended the inning with the score tied 1-1.

Macks Creek plated four more runs in the top of the second. Preston Borgmeyer and Hunter Harris each singled to right. Keith Edelman hit a ball to short where the throw to third to get Borgmeyer was dropped, loading the bases. A strikeout combined with a wild pitch saw Preston score and Harris move to third. A single off the bat of Grant English pushed in Harris, Olivier Sanchez singled, his first Varsity hit, to the hole at short and an errant throw after he had scored Edelman for a 4-1 lead. Grant would later score on Tanner Smith's fly ball to center that was dropped. Sanchez was erased at home trying to score. After the top half of the second it was 5-1. Crocker went 1-2-3 in the bottom of the inning.

In the top of the third Preston Borgmeyer led off the inning with a double to right-center and eventually came around to score on Keith Edelman's two-out single to center. Kyler Gabriel reached on an error at third before a ball to short erased him at second for out number three.

The bottom of the third saw the Lions close to within 6-4. Ely Harrison reached on an error and stole second. He came around to score on Nathan Routh's double to left-center. Javin Cobb and Balin Huey each drew walks to load the bases. Following a strike out, Routh crossed the plate when Wyatt Neuman drew a walk. Brock Ware later drew another walk to push in Cobb before a strikeout ended the inning.

The Pirates responded with two more runs in the fourth. Olivier Sanchez reached on an error at short. Tanner Smith's double with one out moved him to third before Ethan English's ground out to short scored Sanchez. Smith would score on Preston Borgmeyer's third hit, a single to left-center, and move Macks Creek ahead, 8-4.

Crocker plated a single tally in the bottom of the inning. Nathan Routh reached base on an error, stole second, and scored when Balin Huey again singled to center.

Macks Creek again plated a single tally in the fifth. Grant English tripled under the glove of a diving left fielder. Olivier Sanchez was hit-by-a-pitch ahead of a Trever Smith double to plate Grant and move Sanchez to third. Another hit-by-pitch, this time on Tanner Smith, loaded the bases but a strikeout ended the inning. The Pirates now led 9-5.

Again, the Lions responded with three in the bottom half of the inning. A line drive to second of the bat of Nathan Neuman was dropped before back-to-back strike outs brought and end to Macks Creek starter Tanner Smith's day and making the way for Kyler Gabriel to take the mound. Logan Smith was then walked and Ely Harrison singled to load the bases. Nathan Routh walked, plating Neuman, Javin Cobb was hit-by-a-pitch, plating Smith, and Balin Huey walked to bring in Harrison. A strikeout ended the inning with Macks Creek still holding a 9-8 lead.

The Pirates plated another tally in their half of the sixth. Hunter Harris singled to right with one out, moved to second when Keith Edelman's slow-roller up the third baseline was misplayed by the pitcher. A wild pitch moved both runners up a base before Grant English's single plated Harris for a 10-8 lead.

In the bottom of the sixth Crocker pushed in another run. With one out Tyler Busch was hit-by-a-pitch and stole second. After a strike out he came in to score on Logan Smith's RBI-single. He moved to second when the throw from left went home, and an errant throw to second allowed him to move to third. Olivier Sanchez relieved, walking one and striking out another to end the threat with runners on first and third. It was not 10-9.

Macks Creek plated an insurance tally in the seventh. Trever Smith reached on an error by the shortstop, moved up to second and third by wild pitches, and then scored on Ethan English's chopper to short. Preston Borgmeyer doubled to left and reached third when the throw to second sailed into right. He would remain stranded and the Pirates would hold an 11-9 advantage heading into the bottom of the inning.

Crocker's first three hitters in their half of the seventh all reached to create a tense ending. Javin Cobb and Balin Huey and each moved up a base on a wild pitch. Jeffrey Danielson then walked to load the bases. Pirates' reliever Sanchez was able to get a strikeout, a pop out back to him, and then another strike out to end the game and collect the save.

"We played well offensively, we played well defensively, and our pitchers made some big pitches tonight to work us out of some jams at key points," said Macks Creek Coach Jason Trusty.

"It's been a long Fall and we've seen progress as a group. Our goal was to build through this season in preparation for the Spring," added Coach Trusty, "we now head into the off-season with a little momentum and will look at things we can do to make our unit better."

Tanner Smith (1-5) picked up the win in his sixth start of the Fall. He allowed six runs, one earned, on four hits while striking out 13 and walking five in his four-and-two-thirds innings of work. Kyler Gabriel relieved in fifth and worked the next inning, allowing three runs on two hits while striking out two, walking three, and hitting two batters. Olivier Sanchez picked up the save with one-and-a-third innings of work. He struck out three and walked four while allowing no runs.

Javin Cobb took the loss for the Lions. He worked six-and-two-thirds innings, allowing 11 runs, five earned, on 16 hits while striking out nine and hitting two batters. Ely Harrison relieved in the seventh and struck out the only batter he faced.

Macks Creek finishes the Fall at 1-13 while Crocker finishes 0-12.

The JV Pirates fell 6-2 in the night cap.

Trever Smith started and worked the first two innings in suffering the loss. He allowed three runs on two hits, while walking four and striking out three. Preston Borgmeyer worked an inning and was touched for three runs, two earned, on three hits while walking one and hitting one batter.

Dakota Willis collected the only hit, an RBI-single. He also walked. Isaiah Schmidt was beaned twice, Kyler Gabriel walked and scored a run, and Trever Smith reached on an error and scored once as well.

The JV Pirates conclude their Fall with an 0-7 record.