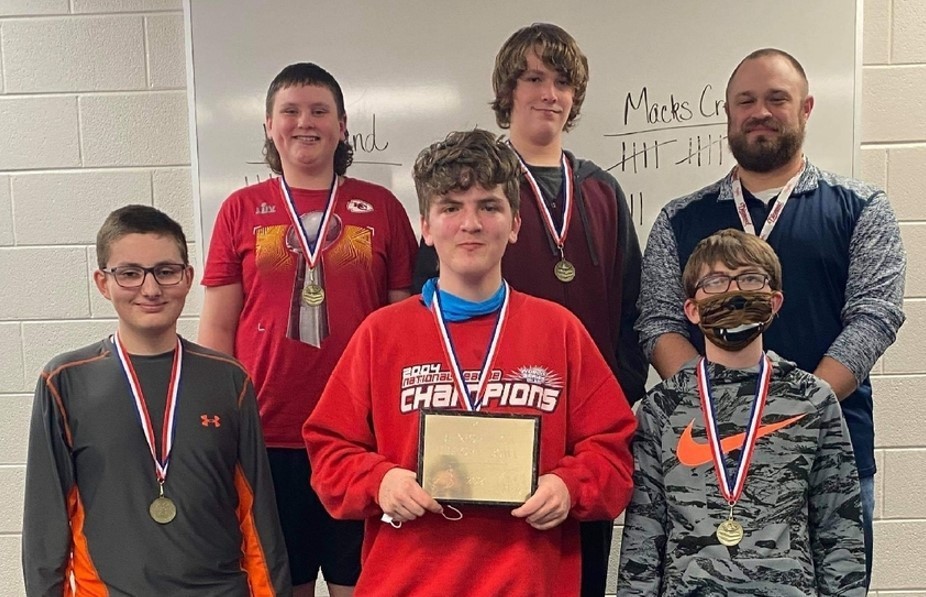 Our Middle School History Bowl Team took first in last night's annual Middle School Polk County League (PCL) History Bowl. The event, hosted here at Macks Creek, occurs the second Wednesday of January every year.  Teams from the eight other schools in the PCL Conference send teams with the hope of bringing home the trophy.  After Macks Creek won the Bowl last year, this year's team of Hudson Lane, Chase Christian, Parker Kolwyck, Paxten Brashears and Trinity Husong made sure the trophy didn't leave the building and kept the title of PCL History Bowl Champions! The action began with the seeding round in which teams, independent of each other, worked together to complete a handout of general history questions. Once the handouts were  returned to the judges, the seeds were determined based upon the highest amount correct.  At that point, Macks Creek and Weaubleau were tied for the top spot. Coaches met to discuss the tie-break and decided to use the highest score from the last set of 10 questions to determine the seeds. The Pirates scored one higher and received the top seed. Play proceeded to individual classrooms where teams went head-to-head in a single-elimination tournament based upon their seed. In each round, the teams used buzzers (just like Jeopardy) to answer two sets of twenty questions. The team with the most points at the end of the round proceeded to the next round. Macks Creek defeated Hermitage in the first round and Dadeville in the semifinals to earn a spot in the championship match where they defeated Wheatland. Macks Creek School is proud of Hudson, Chase, Parker, Paxten and Trinity! #MCPirates