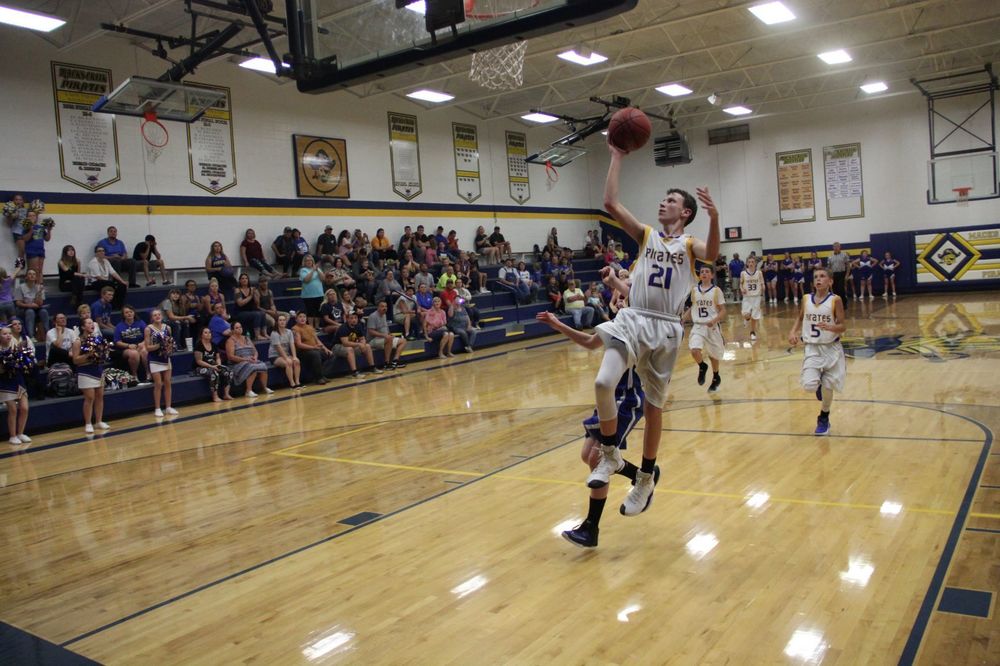 Macks Creek Jr. High Boys started the season in a convincing manner against Walnut Grove on September 4, 2018 with a 67-9 win. All 15 boys saw playing time as Logan Gallamore led the Pirates with 23 points. Chase Whitworth added 10 points and 5 assists and Alex Eidson had 8.

Leading for the entire game, the Pirates outlasted Wheatland at home on 9/6/18 by a score of 52-44. Alex Eidson led the Pirates with a double double scoring 16 points and grabbing 10 rebounds. Nolan Donathan had 13 and Chase Whitworth added 11. Logan Gallamore scored 7, but dished out 11 assists to help the Macks Creek in a balanced attack.

The Pirates came home to the friendly confines of Macks Creek to dispatch of their neighbors to the North, Climax Springs 34-16. Alex Eidson again led the team with 14 points, 9 rebounds, 4 steals, 3 assists and 2 blocked shots. Logan Gallamore added 6, Mason Stoner 4 and Hunter Cullen 4 as the inside height of the Pirates was too much for the Cougars.

Macks Creek ran their record to 4-1 and 3-1 in the conference with an amazing come from behind victory at Hermitage. Trailing by 12 in the fourth quarter, the Pirates went on a 21-3 run to finish the game and win 47-41. Full court defensive pressure by all the Pirates was the difference down the stretch. A great effort from 7th grader Jose Cortez helped spur on the comeback win.

The Pirates fell to Laquey on the road 42-35 for their second road loss of the year. Their physical play from bigger and stronger 8th graders was the difference in the game, according to Coach Duggan. Macks Creek closed the gap to 2 late in the game, but couldn't quite get over the hump. Alex Eidson, Logan Gallamore and Chase Whitworth again led the team in scoring with 10, 8 and 7 points respectively.

Home court again spelled relief for the Pirates as they handled Crocker 38-21. Guard play from Logan and Chase, along with some great minutes from Jose, Tagen Seaton, Aydin Long and Beau Stites kept their guards in check throughout the game. 22 steals from their group was more than the Lions could handle.

The Pirates moved their record to 6-2 and 4-1 in conference with a 40-30 win over visiting Halfway. Alex Eidson again led the way with 20 points and 10 rebounds. Logan Gallamore added 10 points and Chase Whitworth had 6 points and 5 steals. 78% from the charity stripe helped seal the victory at home.

The Macks Creek Jr High B Team improved to 4-1 overall with wins over Wheatland 27-14, Laquey 14-12, Crocker 12-10 and Halfway 18-6, with their lone defeat at Weaubleu 29-51. All the boys are scoring and getting a lot of playing time this season which will help their development down the road.